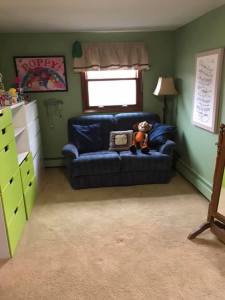 When I heard about the Marie Kondo show on Netflix, I had to watch it. Two years ago, after reading her book, my husband and I turned our home inside out—decluttering everything from our clothes to our cleaning supplies. We completed each stage in turn, and I maintain it was one of the best things I ever did for myself.

(I’ll let my husband tell you if he agrees.)

After starting the process, I immediately felt lighter. I donated clothes that no longer fit. I threw away socks with holes in the toes. I tossed underwear that had gotten faded and grungy looking. I went to Costco and bought a $9 pack of undies in all colors of the rainbow. Opening my unmentionables drawer, which had previously been filled with balled up bras, now elicited a calming sigh of relief.

The KonMari Method is not about getting rid of things, just because. It’s about keeping whatever sparks joy. I’ve found, through the process, that there’s always a way to repurpose those things that spark joy, but have outlived their primary usefulness. My pens and pencils are sorted and displayed in glasses and mugs I’ve retired from the kitchen or bar. I used old, sentimental T-shirts to stuff my purses. Now, whenever I change bags, I’ll see the shirt from when the Cubs won the World Series or from when I played Sarah in Guys & Dolls back in high school a (a crowning achievement).

Fast forward two years, and we’re in a new house. While I’ve managed to hold on to

most of my KonMari principles—look in any of my kitchen cabinets and behold the tidy glory—some parts of our home have started to look like hoarder’s paradise, namely my kids’ rooms.

During our original KonMarification, the kids were seven and five. My husband and I took on the burden of sorting through their toys. Yes, I asked them to decimate their stuffed animals, a task that elicited many tears, but they remained only tangentially invested in the tidying process.

This time would be different.

Last week, after all the Christmas presents had been played with and we’d run out of things to do with six days left of winter break, we sat down as a family and watched the show together. I told them, “We’re all going to do this. You’re going to go through your stuff, and Dad and I are going to go through ours.”

The kids, now ten and eight, watched the show with wide-eyes, marveling at the mountains of clothes piled on beds and hanging on every word out of the spritely Ms. Kondo.

And then the whining began.

“No,” I told them. “We’re going to do this. We’re not going to do it in a day. We’ll start with clothes tomorrow and go from there.”

The next day, they dumped all of their clothing into piles and started sorting, touching every item, and noting which “sparked joy.” I stayed with my ten-year-old, my son, the one who, like me, never met a shortcut he didn’t want to take. My daughter, normally so sensitive, shocked me with her ruthlessness. “I don’t need these pants. I never liked this shirt. This dress itches me.” We went through the lot, and I presented them with the rub: “Now you have to fold everything.”

They took to Kondo’s folding method like a child to any new technology. I assisted my daughter, to help move the process along faster, but they filled their drawers on their own and I made a mental note to myself that this would not be a one-time occurrence. This was their new normal. From this moment on, they would fold their own laundry. I made a second mental note, tallying up all the extra minutes I’d have to read or write or watch old episodes of Frasier.

We KonMarie-ed paper and books—my son kept most of his, because they all sparked joy. Then, yesterday, we moved on to “komono,” the albatross hovering over all of us, their toys and, just, stuff.

I decided their stuff was their stuff. I would not influence their decisions when it came to what to keep and what to get rid of. If I saw something in the trash pile that sparked joy for me, I’d deal with it. This was how I added a few baby books to my own bookshelf.

First I had the kids empty every drawer and find every tiny dollhouse spoon tucked in every corner. They sorted their belongings into categories, including one mountain of miscellany. After each kid had collected all their belongings, I asked them separately, “What do you think?”

Assessing the accumulation of possessions on his floor, my son said, “I’m so disappointed in myself.”

My daughter, “I feel ashamed.”

I felt socked in the gut.

I’d known for a long time that we were heading down the wrong path. I’d beg my husband not to buy them anything at the collectables shop down the street, then I’d take them hunting for Kinder egg toys at Aldi.

We now knew the price of all this stuff: shame and regret.

We could dwell on it or move forward.

I asked my son what he wanted to do with his superfluous toys. He opted to donate them to the pre-K classes at his school. We moved some furniture around and made his room feel homier and more conducive to Lego creation. This morning he woke up, made his bed, and threw his dirty laundry down the chute.

We watched another episode of the Netflix show last night, and he, now an evangelist, mentioned that he knew some other people who should watch the show. He’s been building Lego towers and reading and hugging me more. He’s lighter, happier.

I asked him how he feels about his new, tidy room. Watching his sister dance around his room singing “Shallow” from A Star Is Born, he said, “Fun, but I want her out of here.”

Well, you can’t KonMari everything.